Please join this Facebook group to keep up to date about future events.

Please join the George Peabody Library as we invite you into the halls of the historic Peabody Library for a one of a kind ballroom experience. Each competition category will take its inspiration from the Peabody Library’s selection of rare books dating from the Renaissance through the 19th century.

This invite-only event will celebrate members of Baltimore’s ballroom community. 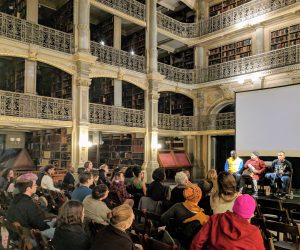 Join us at the stunning George Peabody Library for a free screening of the 2017 documentary KIKI, followed by a panel discussion with members of Baltimore’s ballroom community.

KIKI documents a performance-based artform, ballroom, which was made famous in the early 1990s by Madonna’s music video “Vogue” and the documentary “Paris Is Burning.” Twenty-five years later, a new generation of LGBTQ youth of color have formed an activist performance subculture called the Kiki Scene. KIKI follows seven participants in New York City over the course of four years, documenting their spectacular performances at events known as Kiki balls and their political organizing around homelessness and HIV prevention.